Skip to content
Energetic Felling of the Kosciuszko Bridge

Energetic Felling of the Kosciuszko Bridge

After constructing the first phase of New York City’s new Kosciuszko Bridge— providing a safer and smoother crossing — it was time to safely and carefully demolish the original. Here’s how we executed the explosive finale.

At midnight on October 1, Pat Tamburri arrived at the old Kosciuszko Bridge. He had worked until about 2 p.m. the previous day but couldn’t sleep a wink before starting one of the most exciting days of his Skanska career.

No one had ever used explosives to demolish a bridge in the middle of New York City. The removal of the remaining parts of the original 78-year-old span crossing over Newtown Creek between Brooklyn and Queens would come down with 125 kilograms (275 pounds) of explosives at 8 a.m. that day.

The “energetic felling” of the old bridge would culminate a three-year process to replace it with a lower and wider link of Interstate 278. The implosion that Sunday morning required deft coordination of many moving parts and painstaking planning. Everything needed to be done safely and with care not to disturb the natural environment and surrounding structures, especially the new Kosciuszko Bridge just meters away.

Many stakeholders, much to protect
Pat, now a Skanska Vice President, led the demolition effort in close coordination with project leaders Tolun Tuglu, Matt Settanni and the entire team. They coordinated with at least 10 city, state and federal agencies, multiple subcontractors and many Skanska colleagues. They had to limit vibration and noise impacts from dropping 22.7 million kilograms (25,000 tons) of steel and concrete to the ground. They had to avoid damage to what ran underneath the bridge, including utilities, a railroad track and two fuel lines. And the blasts had to be over quickly, so as not to impede the relentless momentum of New York City traffic.

First bridge of its type
The implosion was one of several firsts for the Kosciuszko project.

The replacement cable-stayed bridge, which New York Governor Andrew Cuomo opened to traffic April 27, is the first of its kind in New York City. It is also the city’s first new major bridge since the Verrazano-Narrows opened in 1964. 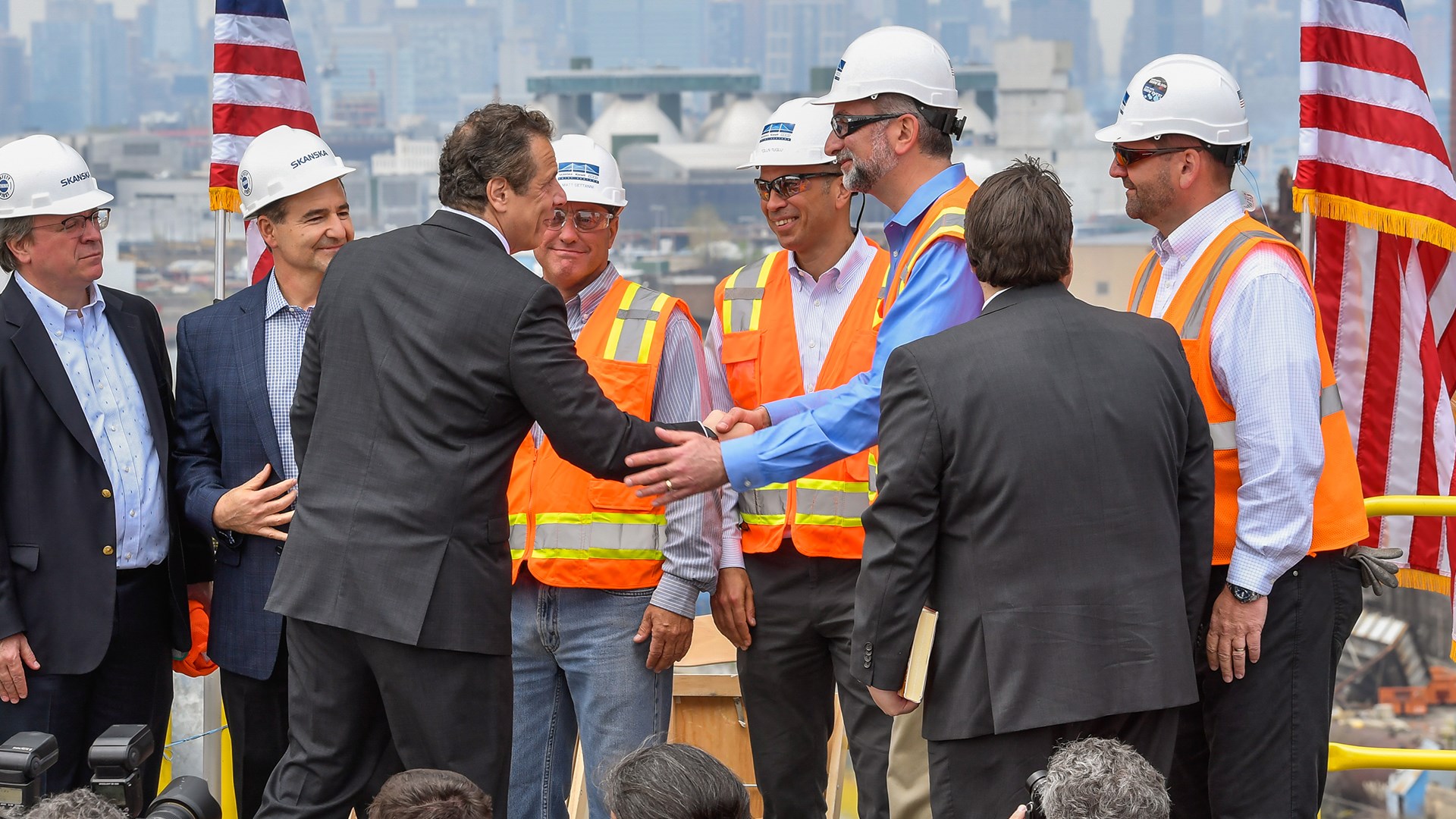 Well-known for traffic delays
Named for a Polish-born U.S. Army engineer and leader in the Revolutionary War, the Tadeusz Kosciuszko Bridge was opened in 1939 by President Franklin Roosevelt. Built to accommodate 10,000 cars a day, it ended up carrying about 18 times that load.

That contributed to drivers being frequently stuck in traffic on the span, and made the Kosciuszko a frequent mention in media reports of traffic delays. And not only was the original Kosciuszko Bridge undersized, in its later years it was showing signs of decay.

An elegant new bridge
In 2014, the New York State Department of Transportation awarded Skanska the contract to design and build the first of two structures comprising the new Kosciuszko Bridge, and to demolish the original bridge.

Until April of this year, Skanska and our partners focused on constructing that new Kosciuszko span, which was just 2 meters (7 feet) from the old bridge in some spots. 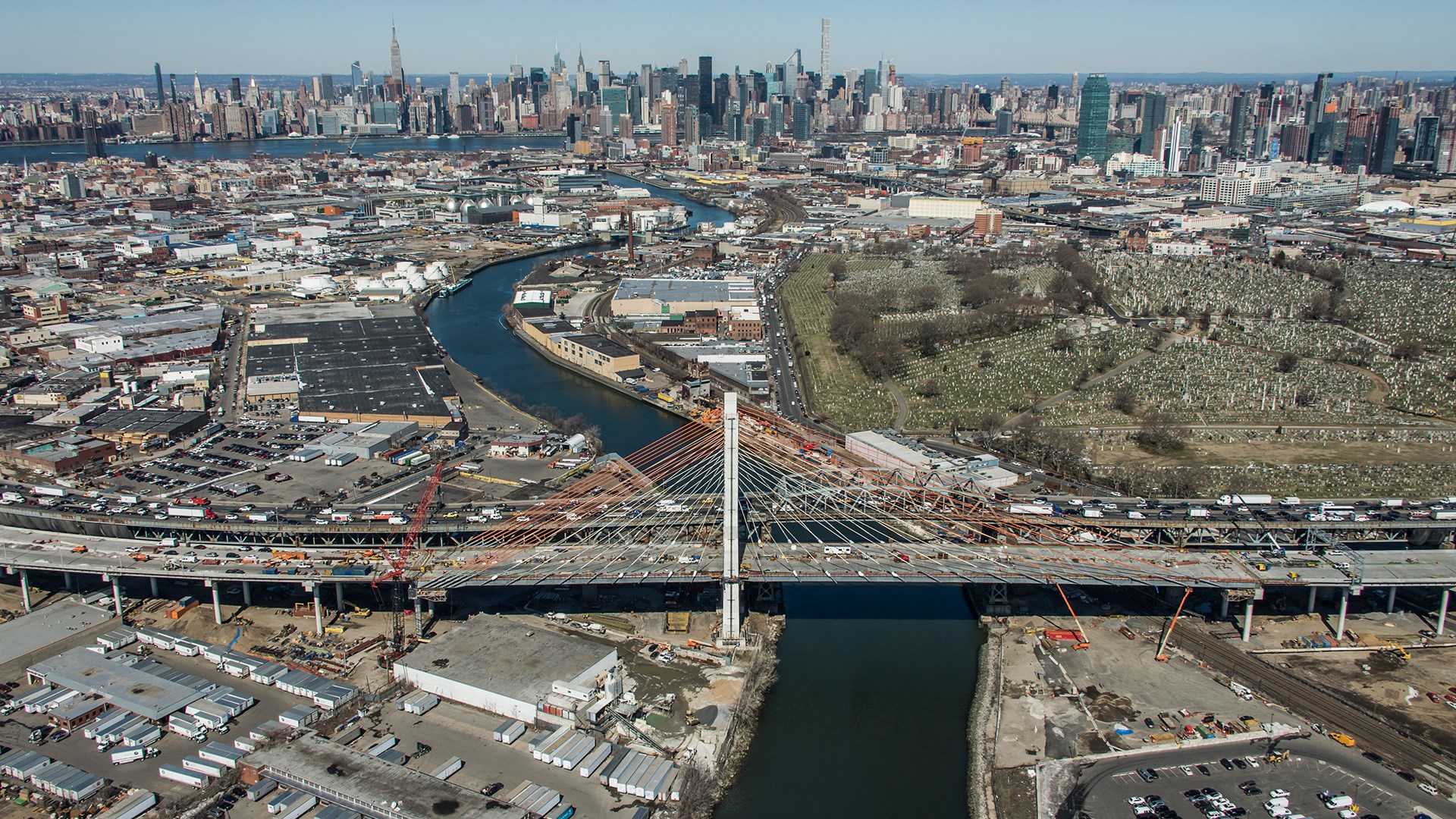 Cables extend diagonally from tall concrete towers to support the new crossing. It looks like the sail of a ship, sleek and elegant. At night, a multicolor LED light shows mirrors the spectacle of the Empire State Building.

Starting at the middle
With the new bridge open, this summer we shifted our focus to taking down the old Kosciuszko Bridge. That process had two stages.

The first stage involved the center section that stretched 91 meters (300 feet) across Newtown Creek, with its water protected by strict environmental regulations. To minimize the potential of any demolition-related debris falling into the water, our joint venture team determined the best approach was removing the entire 2.3 million kilogram (5 million pound) main span as a single unit.

After three months of preparatory work, in July we used powerful jacks to slowly lower the center span to a barge waiting on the water below. The old gray span was then transported to a recycling facility in New Jersey.

Using gravity to eliminate risk
But most of the old Kosciuszko Bridge remained. Still standing were the approaches at both ends of the bridge – those rose from ground level to more than 30 meters (100 feet) high. Each side consisted of 10 spans stretching a total of about 396 meters (1,300 feet).

We considered removing the approaches in the same way as the center section, but with different conditions that would have taken too long and cost too much, Pat says. Workers would have to spend days high up in lifts, subject to winds as they used torches to cut the steel into pieces.

There was a better and safer way. Explosives would do the cutting in mere seconds, explains Jessica Miller, a Skanska Project Manager. The giant sections would drop in a carefully planned way, without the need for supports or slow descent.

“Gravity would do all the work,” Jessica says. “It would eliminate so much risk.”

Gathering support
Much of the hardest work happened behind the scenes, in meetings with key stakeholders potentially affected by the felling.

Skanska received key support from the New York City Fire Department, which would oversee the felling for the city. After two public meetings with community groups, residents and property owners gradually embraced the plan – it would minimize the effects on them.

Readying for the big boom
To get ready for the explosive farewell of the old Kosciuszko Bridge, workers removed much of the blacktop driving surface. This reduction of weight, in addition to precise cuts to sever non-critical parts of the steel superstructure, weakened the bridge enough for it to drop easily.

On the ground, Skanska added berms, piles of dirt 6 meters (20 feet) high to absorb vibration and the impact from the falling spans. We protected the railroad track with berms on both sides, as well as timber and steel plates, and did the same for the fuel, sewer and water lines underground. We had to make sure that the vibration of the dropped spans would stay within a strict limit to avoid damaging nearby structures. 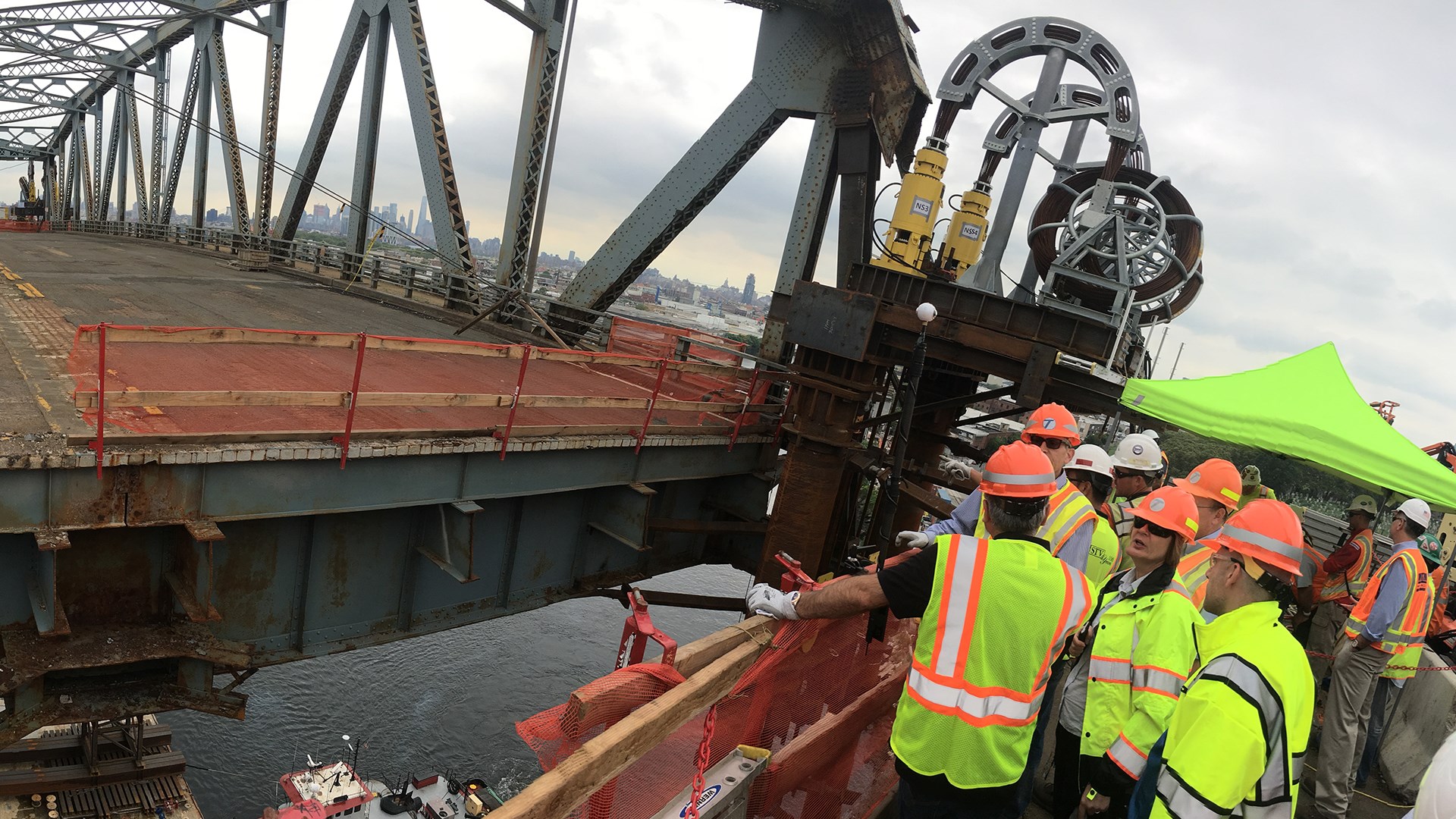 “We went above and beyond to make sure we didn’t have any unexpected consequences,” Jessica says.

“Like a giant samurai sword”
A Skanska subcontractor placed 944 charges, explosive powder wrapped in copper tubes about 46 cm (18 inches) long. The charges, attached with giant rubber bands, tucked under the trusses at the corners of each span.

Detonation cords strung the charges together, so they’d ignite one after another in quick succession, like dominoes. The powder exploded through the tubes, sending the energy across the steel and slicing it in a straight line.

“It’s cleaner than if a torch had cut it,” Jessica says. “It’s like a giant samurai sword came through the bridge and cut it.”

Beginning the countdown
On the day of the implosion, Pat Tamburri and our team spent the wee hours coordinating with various government agencies. At 4 a.m., the New York State Police set up an “exclusion zone” that would keep everyone back a safe distance from the bridge. The U.S. Coast Guard closed off marine traffic on the creek. And preparations were made to halt traffic on the adjacent new Kosciuszko Bridge in the minutes before the final countdown.

Three minutes before demolition, a horn blasted. Two horns sounded at two minutes. Finally, three horns at one minute. A countdown started at 10 seconds, broadcast on an official radio channel. Just outside the exclusion zone, Pat stood in one of the operation’s command centers. He and others were monitoring those about to press the buttons to light the explosives.

“My heart was in my throat,” he says.

Gone in less than five seconds
Then the months of planning and preparation became reality.

“The blast went off, and it was so dramatic that it just took my breath away,” Larry says. “The noise was shocking.”

The series of charges for each approach section were exploded within milliseconds of one another, which helped temper noise. The Queens approaches began their descent first, with the Brooklyn side following less than two seconds later. The sections fell one after another. The old Kosciuszko Bridge was reduced to scrap in less than five seconds.

“When I saw that everything fell and nothing was left hanging, I was relieved,” Pat says.

Returning to normal
The vibration measurements came in under the limit. National Grid checked its gas lines and found no leaks.

Skanska released a cleanup crew onto the new bridge to clear bits of debris – mostly copper casings and netting that flew from the charges. Within about 25 minutes, vehicles began moving again.

“I couldn’t be prouder”
Crews will continue to chop up the bridge pieces through December, sending them to scrap yards that will recycle them for new uses, Pat says. He and Jessica continue to wrap up the project from the site office underneath the new Kosciuszko Bridge.

“When I look outside now, the old bridge is down and the new bridge is a dramatic part of the skyline,” Jessica says. “I couldn’t be prouder.”

The First Cable-Stayed Bridge in NYC

On behalf of Governor Andrew Cuomo and the New York State Department of Transportation, Skanska USA and joint-venture partners Kiewit and ECCO III Enterprises have made history by bringing the 1st cable-stayed bridge to New York City. The 78-year-old Kosciuszko Bridge will ultimately be replaced by two new state-of-the-art bridges. The Queens-bound span (Phase I) opened to traffic on April 27, 2017, and is wide enough to carry traffic in both directions until the original bridge is demolished and the Brooklyn-bound span (Phase II) is constructed.

Our teams have extensive construction experience on a variety of infrastrucure projects including: