This year, we're celebrating 75 Years Building New England. Since 1946, our team has been building and developing what matters in our beloved northeast states, from major university renovations and health care centers to aviation projects and cultural developments. We chatted with EVP/General Manager of USA Building (USB) Bryan Northrop, EVP of USA Commercial Development (CDUS) Russ DeMartino and Senior Vice President of USA Civil (USC) Paul Pedini to get their thoughts on reaching this milestone. 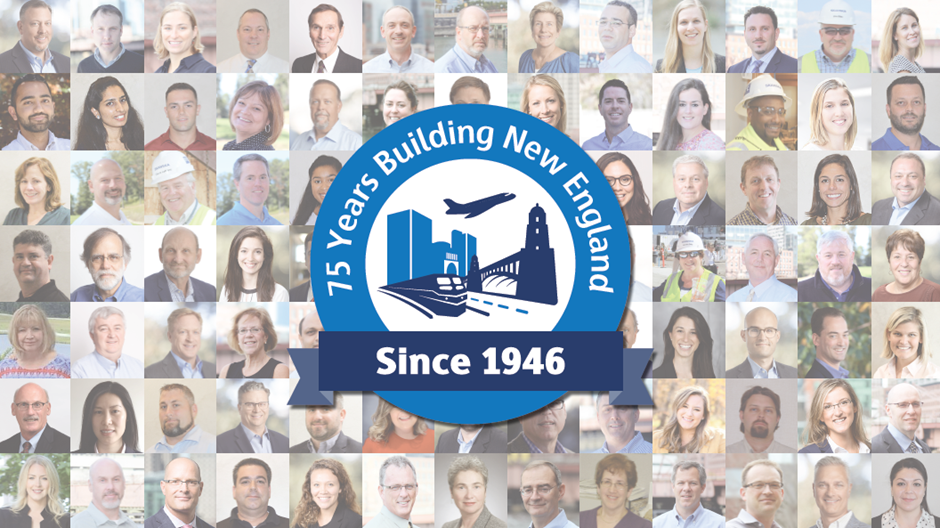 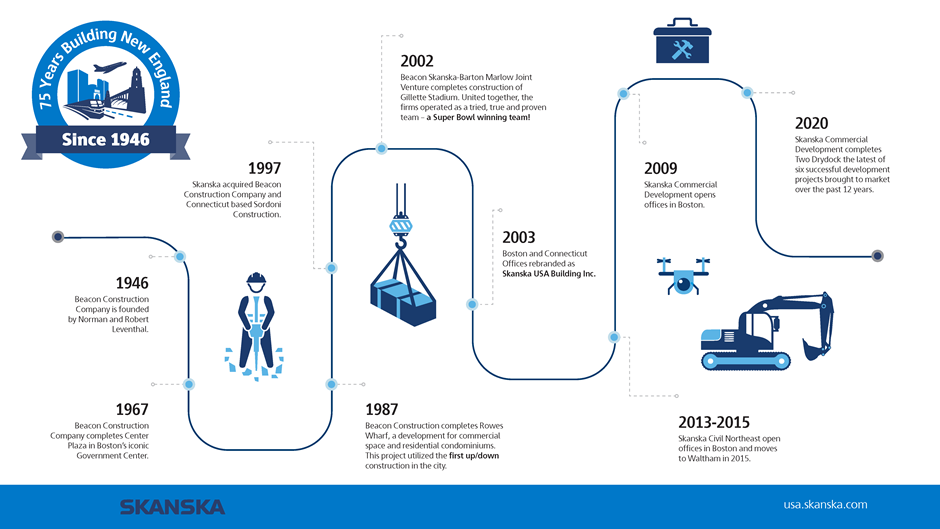 How does it feel to reach this huge milestone?

Bryan: We're one of the older construction companies in Boston, and we transitioned from a small, family-owned company into an international one. About 20 of our employees have been with us since we were Beacon Construction. That “family-owned” feeling remains today. Construction is a very local business, so it's great that we're part of this big organization with unlimited resources while still having this local, smaller-company feel in the region.

Paul: I worked on the first Civil job in the early 80s, so while it makes me proud, it also makes me feel “seasoned.”

Russ: Over the past 75 years, we’ve built some landmark projects in Boston that are part of the skyline. They’re part of the identity of Boston, so there’s a level of credibility and trust that comes with that, and it makes it a source of pride but also a huge part of telling the Skanska story to potential clients.

What’s your favorite project in your business unit that we built or developed in New England in the past 75 years?

Paul: The Chelsea Viaduct was a very successful USC job because it was a test of the Skanska risk model. When the job was advertised, it was high-risk, which motivated us to seek a change to the means and methods. We turned a night job that was very close to adjacent residences and with all activities occurring on the bridge deck, into a day job with our forces working on the ground. We also detected several latent issues in the design early enough that the bridge steel was redesigned and installed with no issues, averting potential crippling delays. MassDOT said that it ended up being one of the best jobs they had in recent memory.

Russ: As a business unit, CDUS is much younger, and it's always our latest project that’s my favorite. That’s very intentional. Every project that we work on, we try to make it better than the last. That’s why Two Drydock stands out to me. Everything about that project was better than our previous project, from our partnership with USB to the tenant reaction of the finished product.

Throughout the operation of our business units, we’ve learned from each other. For example, Bryan's teams have learned where the touch points are with our customers, and we know more about the risks on the construction side. Creating these partnerships within Skanska have helped us on pursuits. Partners look for a company that isn’t just a good developer, but that also brings expertise on the building side.

Bryan: The most recognizable USB project is Gillette Stadium. You won’t find a football fan in the United States who doesn't know Gillette Stadium. The New England Patriots have been on a winning streak since we opened it in 2002, so a lot of our employees up here feel a connection to the team and the stadium.

What is your favorite community initiative you've completed in the past 75 years within your business unit?

Bryan: Over the past year and a half, some of our team members have worked with King Boston, a nonprofit that’s building a memorial to Martin Luther King Jr. and his wife, Coretta Scott King. It’s a large bronze sculpture, called The Embrace. We’ve volunteered our project management services, and it’s estimated to get unveiled in February 2023. Given everything that's going on right now in our society, this is a project we feel strongly about because it’s long overdue that the Kings’ contributions to the Boston community and our nation are recognized.

Paul: The Chelsea Viaduct, while not a philanthropic or public service effort, yielded significant benefits for a hard-working community that was ground zero for COVID-19 and needed a break.

Russ: I was very proud of how we handled the boat find at 121 Seaport. We designed and rebuilt Harbor Way to be a walking museum and homage to the history of the Seaport area.

How are our projects impacting society and the local community?

Russ: The impacts of the projects that we work on are seen 75 years after they're completed. I have a 21-year-old daughter who hangs out with her friends in Seaport because they go to the coolest neighborhood. What I find remarkable about that is that when I moved to Boston in 2006, there was no Seaport—there were just empty parking lots.

Bryan: My kids were born in Beth Israel, and Skanska built that Bed Tower. We're building Brookline High School, and some of our employees have children in the Brookline School system. We’re expanding Moderna’s manufacturing facility so they can increase their distribution of the COVID-19 vaccine. Not only do you get to drive around and see all the projects you've built and show your kids that you were a part of that, but you can see how the projects play a role in your life and in the lives of your neighbors and friends.

Paul: Our roadway projects have been extremely important to the area. Some of our team members worked on the Central Artery project that made a significant impact to Boston. For anyone who commutes through or to downtown Boston, those roadways are dramatically improved from what they were 25 years ago.

What are you looking forward to in the next 25 years?

Paul: Skanska USC will grow to be the dominant infrastructure company in the region, taking advantage of our capabilities with large, complex jobs and best value procurements. We will carve out a niche with this capability for projects that combine the talents of our business units.

Russ: I want to see all 1.7 million square feet of Simmons University built out, and the Longwood medical area operating with the same energy and excitement that the Fenway operates, where we built the Harlo. I want Skanska to play a huge role in creating a new identity for that neighborhood.

Bryan: A lot more Skanska-built buildings in the Boston skyline. I'm also looking forward to buildings becoming more sustainable and user-friendly. I think it will allow for a better living and working situation in those buildings.

As far as how the construction industry will change in the near future, I hope for a more diverse workforce that mirrors society. That’s not just management, but also craft workers. In Boston, we need to support more diverse businesses, whether that’s women-owned, minority-owned or veteran-owned. We need to find opportunities to make headway. We all have an obligation to help those firms get their start and support them until they succeed.