Our Orlando, Florida team is well underway in the construction of a state-of-the-art orthopedic facility for Orlando Health.

The 371,815 square-foot institute features two buildings connected into one—one half is a medical pavilion and the other half is an orthopedic specialty hospital.

Managing the logistics of a tight site and schedule

The institute is a major addition to Orlando Health’s downtown Orlando campus, which means our team is working in extremely tight quarters on the site.

On various sides of the buildings, there is only five or ten feet separating our project from the property line.

Coordinating logistics is a big challenge with such a tight site in a busy neighborhood. Due to active neighboring construction projects, we’re organizing deliveries into the jobsite at night to help limit the amount of disruption to the streets.

We’re also working with the City of Orlando to shut surrounding roads down to perform underground work and set the two elevated pedestrian bridges.

One of the bridges crosses over to the parking garage to the north and the other one crosses to the south and ties into the existing Orlando Health Orlando Regional Medical Center patient tower.

Our schedule is 31 months from start to finish for both buildings.

We’ve hired two mechanical, plumbing and drywall trades to help with manpower and limited resources. Because the two buildings are two separate occupancies, this was an easier split down the middle between the trades.

Currently, we have over 500 people working on the job.

The trades utilize the two tower cranes day and night with multiple shift work over the last six months. This consists of miscellaneous steel crews working at night and a day shift of setting unitized curtainwall and exterior skin components

Our crane time is the biggest limiting factor to our schedule.

Due to the space confinement in the MEP areas, we’re coordinating prefabricated multi-system overhead racks—a set for electrical, and a set for mechanical piping, medical gas and plumbing.

In healthcare facilities, ceiling space is premium, and that is also the case in the MEP areas. 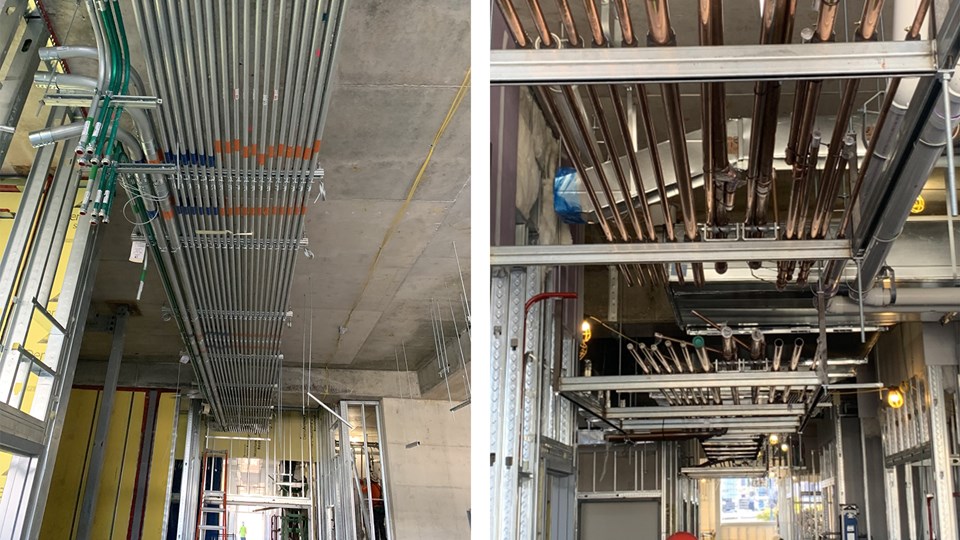 Our team is leveraging a 3D modeling firm to support visual representation of our phasing plans by floor, instead of our subcontractors doing their own 3D coordination. This company, which crosses all MEP disciplines, has more resources which keeps the project on schedule and saves time.

Another advantage of prefabrication is that it helps with the schedule and keeping the jobsite clean so we can work more efficiently and safely.

Utilizing prefabrication, our team members can put in a whole floor of in-wall—about 40,000 square feet—in just two weeks. There’s also less material on the ground because they’ll bring in the prefabricated racks at night and stand them up the next day.

Keeping our work area clean and organized is especially important on a tight site because getting materials into the building is a challenge. This has helped with the increase in production along with the prefabrication of the MEP systems.

Making an impact in the city of Orlando

Florida is unique in that it’s home to a larger population of retirees who require more frequent orthopedic care. There are also a lot of sports venues in Orlando where people play soccer, basketball and golf.

Once this institute opens, it will serve both the sports community and older generations in need of specialty services.

Upon opening, the Orlando Health Jewett Orthopedic Institute is expected to add 500 jobs. It will also be one of the only orthopedic-specific hospitals in the Southeastern United States.